Probably Acupuncture or acupressure sounds familiar to you...

You have maybe heard of the healing effects in Traditional Chinese Medicine...

What if you could use this technique yourself without going through the Chinese schools of medicine?

EFT is based ion the same principle, except, it is for you and me... For everybody to use without deep knowledge of meridians, energy systems etc...

When you visit an acupuncturist, he will place needles on specific meridians points associated to your troubles, and release the blocked energy, an acupressurist or a reflexologist will press on those same points.

For laymen or women who do not know which meridian relates to which organ, emotion, or even physical disorder, EFT has made it simple...

This is a technique that you can use anywhere you are , anytime.

Join me in a 1 day workshop to learn more about making it even more effective. Check the calendar for the next workshop, or

If you already have had some experience with EFT, and are just interested in the 'Basic Recipe", here is how it goes:

I deeply and truly accept and love myself"

on the following sequence with 2 fingers, while addressing the problem state, i.e. saying : "this feeling of ....." 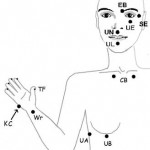 4. Tap on the gammut point 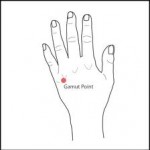 and while tapping, do the following:

5. Do a second round of tapping on the same points again

7. Start from the top again

9. Repeat until you reached 0 on the scale!